Gary Duffy reports: ”It seems that they had great difficulty getting out”

At least 232 people have died in a fire that swept through a nightclub in a university city in southern Brazil, police and officials say.

Local media say the fire began when a band let off fireworks at the Kiss club in Santa Maria, Rio Grande do Sul.

Many victims reportedly inhaled toxic fumes or were crushed as panicking clubbers tried to escape.

Bereaved families have gathered at the scene where the fire is out and bodies are being removed.

President Dilma Rousseff, who cut short a visit to Chile, has been visiting survivors at the city’s Caridade hospital along with government ministers.

She said earlier that everything possible would be done to help the injured and the families of the victims.

“I would also like to say to the Brazilian people and to the people of Santa Maria that we stand together at this time, and that even though there’s a lot of sadness, we will pull through,” she said, speaking from Chile.

In a tweet, the governor of Rio Grande do Sul, Tarso Genro, said it was a “sad Sunday” and that all possible action was being taken in response to the fire. He would be in the city later on Sunday, he added.

A firefighter told BBC News he had never seen such a tragedy in his life, with the victims “so young”.

The priority for the authorities is now to identify the dead with many distressed relatives arriving at the scene, but in the hours ahead the focus will turn to the cause of this accident and safety procedures at the club, the BBC’s Gary Duffy reports from Sao Paulo.

The death toll, which had earlier been put at 245, was revised down by fire officials. Emergency services said a further 117 people were being treated in hospital. 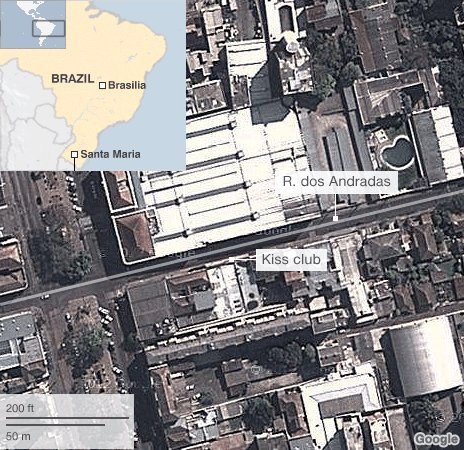 According to local newspaper Diario de Santa Maria, students from the city’s federal university (UFSM) were holding a freshers’ ball.

“We looked up at the ceiling in front of the stage and it was catching fire,” eyewitness Luana Santos Silva, 23, told Brazil’s Globo TV.

“My sister grabbed me and dragged me out on the ground.”

The exit, she said, was a “small door for lots of people to come out by”.

The young woman’s sister, Aline Santos Silva, 29, added: “We managed to see it in time and to get out quickly, before the smoke began to spread.

“The smoke spread really quickly, it didn’t give enough time for people to get out. I think people started to feel unwell, and then they began to come out covered in black smoke stains.”

Fire crews tried knocking through an exterior wall to help those trapped inside to escape.

“The toxic smoke made people lose their sense of direction so they were unable to find their way to the exit,” said Dr Paulo Afonso Beltrame, speaking by phone from Caridade hospital.

“Apparently they confused the bathroom door with the exit door.”

Speaking to BBC Brasil, Sergeant Arthur Rigue, from the local fire department, said: “I never witnessed a tragedy like this in my whole career.

“These people are so young… There were many bodies piled up in various parts of the place. Some were in the toilet. They died of asphyxiation.”

A temporary morgue has been set up in a local gym as the city’s main morgue is unable to cope.

They were led in one by one to see the bodies, according to the paper.

President Rousseff said the air force had made “resources” available at an air base near Santa Maria to help.