UK – Official new data shows that today’s eggs contain more than 70 per cent more vitamin D and double the amount of selenium than when previous analyses were carried out 30 years ago.

UK – Official new data shows that today’s eggs contain more than 70 per cent more vitamin D and double the amount of selenium than when previous analyses were carried out 30 years ago. 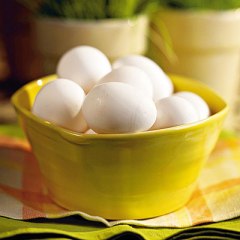 The data, produced by the UK Foodcomp project consortium, funded by the Department of Health as part of their rolling programme of nutrient analysis surveys, provides the first update on the nutrient content of eggs since the 1980s.

Professor Judith Buttriss, Director General of the BNF, explained: “This is the latest in a series of analyses from the DH-funded UK Foodcomp project that provide up to date information on the composition of the food we eat. These particular data reinforce the contribution to essential nutrients that eggs can make as part of a varied diet, for people of all ages.”

The new analysis, part of which is being presented at The Nutrition Society’s Summer Meeting on 18 July, found that two medium eggs can provide around two-thirds of the RDA (Recommended Daily Amount for EU labelling purposes) for vitamin D. The additional vitamin D found in eggs is particularly significant in the light of evidence suggesting that a large proportion of people in the UK have an inadequate supply of this vitamin.

It has been suggested that, in addition to the well-established role of vitamin D in bone health, this nutrient may also play a role in the immune system and beneficially influence the incidence of some cancers, cardiovascular disease and diabetes.

“This is a very welcome finding at a time when there is rapidly accumulating evidence that a lack of vitamin D could be a risk factor for a number of chronic diseases,” says Cath MacDonald, independent nutritionist.

The increased selenium content of eggs is also of public health significance as UK selenium intakes have declined in recent years alongside a switch from North American to European wheat[4]. Selenium is important in protecting cellular components such as DNA, lipids and proteins against oxidation.

The new analyses reveal that an average medium egg now contains around 177mg of cholesterol, although it is now acknowledged that cholesterol in foods such as eggs does not have a significant effect on blood cholesterol in most people. All major UK heart and health advisory bodies, including the British Heart Foundation, have already removed the previous limits on egg consumption linked to their cholesterol content.

The changes are believed to be the result of improvements to hens’ feed, an increase in the ratio of white:yolk in an average egg, and improved analytical methods since the last official Government analyses were carried out in the 1980s. Vegetable oils replaced meat and bonemeal in UK hens’ feed in the 1980s and it is believed that better quality oils, together with other enhancements to hens’ feed, have improved the hens’ absorption of fat-soluble vitamins and the take-up of nutrients.

Paul Finglas, coordinator of the UK Foodcomp project at the Institute of Food Research, said: “The results from this project are important for monitoring the quality of our national diets through surveys such as the Department of Health’s National Diet and Nutrition Survey, and show the benefits of private:public partnerships working together to support new research projects.”